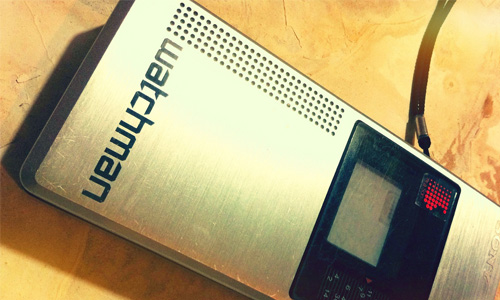 The first Sony Watchman was released in 1982.

I first remember seeing a Sony Watchman in 1983. I don’t remember the exact price, but remember it being a little bit on the expensive side. Still, a television in your pocket was groundbreaking in 1983. It had a very small screen that was monochrome, but it was still considered a futuristic gadget.

You could jog with the Watchman — even though it wasn’t a good idea. You could even work out with one at the gym. The Watchman was like the iPhone of the 1980s — only not as popular. The Watchman sold well enough for Sony to continue production, but it never hit the feverish sales or cultural relevance of the Walkman. 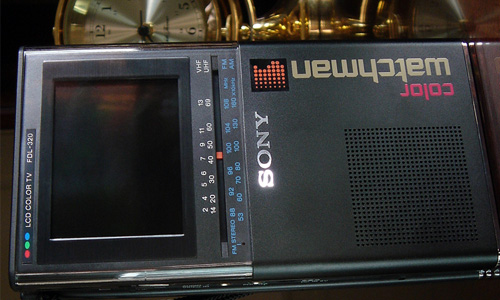 By the end of the 1980s, you could find a Sony Watchman with a color screen.

By the end of the 1980s, the screens started to get a little bigger. The Sony Watchman added an FM radio and digital clock. Most importantly, the screen was now in full color. Sony’s small screens extended beyond the Watchman; they were soon seen on boomboxes as well. For a while, it looked like Sony was going to rule the portable television industry — one that most other companies stayed away from.

So, what happened to the Watchman? By the end of the 1990s, digital television took over analog television, thus making the Watchman irrelevant. However, the Watchman proves that Sony started the portable video industry. It wasn’t Apple, like most people think. Right after Sony stopped producing the Watchman, companies like Compaq and HP released the Pocket PC, which, with a memory card, could play videos. Sony joined in the portable digital video player phase with the CLIÉ series of digital assistants that ran the Palm OS operating system.

Believe it or not, we weren’t always able to watch a television show when we wanted to and where we wanted to. However, we owe great gratitude to Sony. The company not only made portable music listening possible, but started the portable video revoluti0n as well.

Daryl Deino has been a technology enthusiast since 1995 and has written for several newspapers and technology sites. Please reach him at [email protected]
View all posts by Daryl →
This entry was posted in Review and tagged Sony, Technology Flashback. Bookmark the permalink.