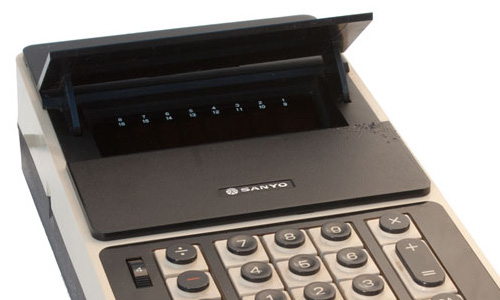 The Sanyo ICC-1081 was one of the first mainstream "smaller" calculators released in the United States.

The Sanyo ICC-1081 and the Canon Pocketronic were two of the first handheld calculators that became available in the 1970s. The ICC-1081 was introduced first, around 1971. It wasn’t actually “portable” in the way we use the term today, but its handheld size was considered a marvel back then. It sold for $425 when it came out then, which is the equivalent of over $2000 now. It provided four basic operations and displayed as many as 16 digits.

The Canon Pocketronic was noticeably smaller than the Sanyo ICC-1081 and instead of s digital display, had a small printer. Therefore, you would have to print out a receipt-like piece of paper every time you wanted to do a calculation. It came with a 15v rechargeable battery. Future Pocketronic models came with a display. 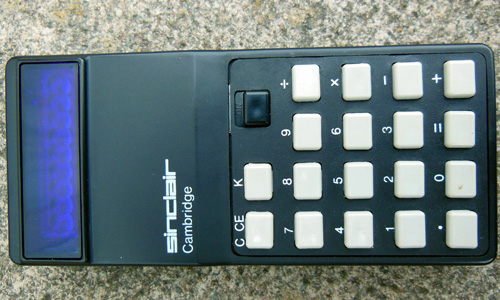 The Sinclair Cambridge was one of the first "affordable" calculators.

The first affordable handheld calculator, the Sinclair Cambridge, came out in 1973. It displayed up to eight red digits and required four AAA batteries. In the United States, the Cambridge sold for $79.95 as a build-it-yourself kit and $99.95 as a fully assembled unit. Can you imagine buying a calculator and having to put it together in 2016?

Calculators soon were able to be powered by solar cells. The Sharp EL-8026 was one of the first solar-powered handheld calculators. It had an 8-digit LCD display and offered four functions, including percentage and square root features.  Sharp would eventually improve its solar calculators by making them smaller and sharper.

By the 1980s, calculators were mainstream and could do a lot more. For example, the Casio FX-7000G (1985) was able to store up to 10 programs in individual slots. It didn’t quite fit in your pocket, but it definitely fit inside your high school Algebra folder or book. It’s funny that in the 1980s, students were often accused of cheating when using calculators. Now, text messaging answers to test items has taken over in the cheating department.

Millennials laugh at the thought of a calculator. However, without the calculator, we wouldn’t have the handheld smartphones and even handheld computers that we have today. Sanyo, Canon, and Casio ushered in an era that still inspires electronic devices today.

Daryl Deino has been a technology enthusiast since 1995 and has written for several newspapers and technology sites. Please reach him at [email protected]
View all posts by Daryl →
This entry was posted in Review and tagged Calculators, Sanyo. Bookmark the permalink.