I was glad to be working Wednesday on a film (with Denzel Washington!), but couldn’t wait till the night ended so I could get home to my new Samsung Galaxy S8+, which had been delivered earlier in the day. I finally got home at 10:00 p.m. an opened up my new toy.

I had played with the Galaxy S8+ late last month and was impressed, but wasn’t sure mine would last beyond the two weeks return period. I recently wrote about how disappointed I was at the single-lens camera (apparently Samsung originally intended to have a dual-lens camera), which is inferior to that on the iPhone 7 Plus. I’m still disappointed, but in some tests, found that the Galaxy S8+ camera is slightly improved from the Galaxy Note 7 and Galaxy S7 Edge from last year. 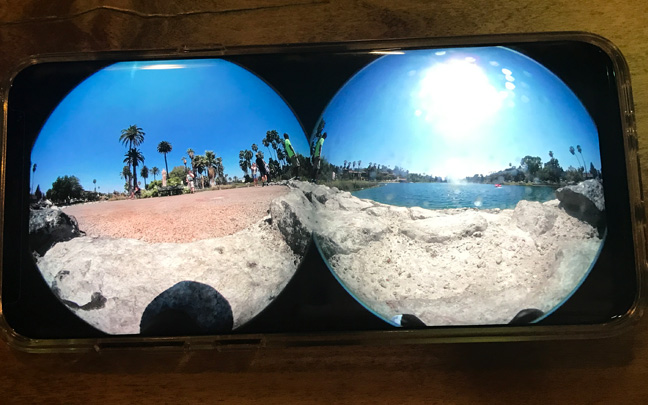 The Samsung Galaxy S8+ has a beautiful screen.

Overall, I am leaning on keeping the Galaxy S8+ and using my T-Mobile “JUMP” plan to exchange it for the Galaxy Note 8 when that comes out. In fact, I have to say that the most disappointing thing about the S8+ is that I wish it had a pen to go with it’s mammoth screen.

Here are some of my first-day use observations:

That’s all for now. The Galaxy S8+ includes everything but the kitchen sink…and a pen stylus. It will be interesting to see how Samsung improves on their latest smartphone when the Galaxy Note 8 is released late this summer.

Daryl Deino has been a technology enthusiast since 1995 and has written for several newspapers and technology sites. Please reach him at [email protected]
View all posts by Daryl →
This entry was posted in Review and tagged Galaxy Note 7, iPhone, Samsung Galaxy S8. Bookmark the permalink.