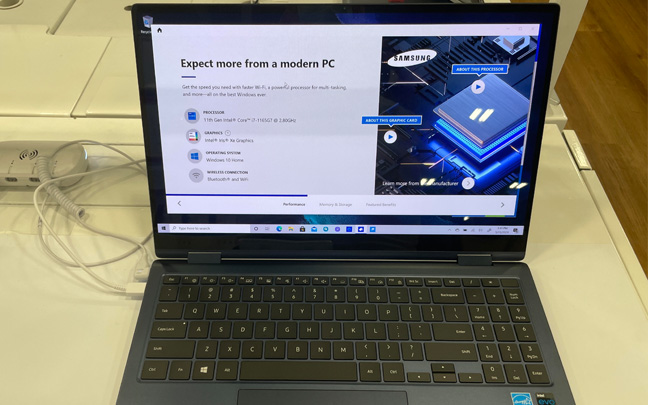 The Samsung Galaxy Book Pro 360 laptop was announced with a lot of fanfare a few weeks back, and a lot or the excitement was for the 15-inch version. A thin laptop with a Super AMOLED screen and an Intel Core i7 processor sounds like a dream to laptop enthusiasts and looks really good on paper. Then, when you see it in person, reality strikes.

10 years ago, a 1080p screen on a laptop was considered high-end. In 2021, it’s out-0f-date — especially on a 15-inch laptop. No matter how vibrant the screen is, the fonts look chopped, and it’s difficult to see details on high resolution photos.

It’s obvious Samsung did this to save battery life (and most reports have the battery life lasting 10-11 hours), but I think it’s too much of a sacrifice. While 4K on a laptop is certainly overkill, a 2K 15-inch laptop screen would have been ideal.

It’s a surprise to see that a company like Samsung doesn’t realize that 16:9 screens are outdated. They may be perfect for watching movies, but the screen is too wide for most other tasks. It’s especially surprising Samsung wants you to use the 360 Pro as a tablet, which feels awkward.

Companies such as HP and Dell have heard from consumers and offer less rectangular screens for their latest devices. For example, HP’s 13.5-inch Spectre x360 now has a 3:2 aspect ratio, while Dell’s latest XPS 13 shifts to a 16:10 ratio. You can still watch movies on these devices, although there will be small black bars above and below the screen. Most people are okay with the compromise. 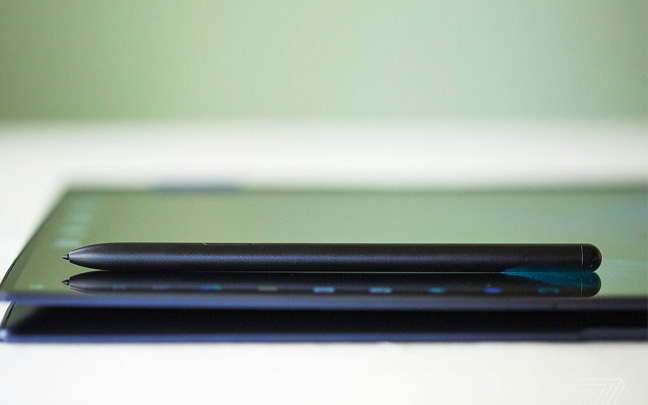 The Galaxy Book Pro 360 is incredibly thin, but the quality of the keyboard is compromised.

Samsung had to make some sacrifices in making such an impressively thin laptop that’s almost as think as their smartphones. Unfortunately, that means the keys have less travel than normal. While it feels better than Apple’s failed Butterfly keyboard, it still feels compromised.

Samsung is known for putting excellent speaker technology in their smartphones and tablets, but they somehow skipped their new laptop. The stereo separation may be good, but the sound is just too tinny. If you get this laptop, you will definitely want to pair it with a Bluetooth speaker.

The Galaxy Book Pro begs to be used as a tablet. The main obstacle is Windows 10, an operating system that has become more tablet-friendly but still aimed primarily for desktop use. The inking is as good as it gets for a Windows 10 device, but the Samsung Galaxy Tab S7+ and the iPad Pro offer a much better tablet experience.

The Galaxy Book Pro 360 was Samsung’s chance to make a dent in the PC market. Instead, it barely makes a scratch. Perhaps the next generation of Samsung’s new laptop/tablet hybrid will be better.

Daryl Deino has been a technology enthusiast since 1995 and has written for several newspapers and technology sites. Please reach him at [email protected]
View all posts by Daryl →
This entry was posted in Review and tagged Samsung Galaxy Tab S7+ Pro. Bookmark the permalink.