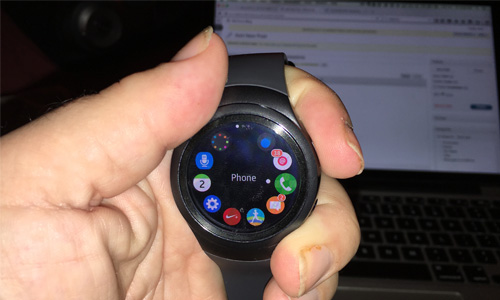 The Gear S2 smartwatch was said to be a competitor to Apple Watch, but I certainly didn’t feel that way after using it for three days. While it is a nice piece of hardware, the software just made the whole thing feel like a beta product. Of course, the same thing could be said about the Apple Watch, but it least it’s a beta product that is useful.

Well, the Gear S2 may become something more useful now. According to TechnoBuffalo, Samsung has just rolled out an update for their new watch. Besides fixing some annoying bugs, Samsung has also added a new ESPN app, a news briefing app, and a world clock. There are also new watch faces added as well as a search function in the Contacts app. For those who care about emojis on their watches, Samsung has added that as well. This is something that helps convince buyers that the Gear S2 is a better buy than the Apple Watch, even though it’s already cheaper.

The Gear S2 will be compatible with the iPhone very soon.

There is also good news for those who want to buy the Gear S2, even though they have an iPhone. According to SamMobile, that is about to happen soon.

“Gear S2 owners will be able to use their smartwatch with an iOS device as well by first installing an app on that device which will allow them to set up and customize the Gear S2 for use. They will reportedly be able to use all of the features available to Android users.”

You can actually get a 3G or 4G version of the Gear S2 now at your carrier. While AT&T offers a 3G version, T-Mobile offers both 3G and 4G versions. I am going to take a look at this today and will update this blog after I spend some time with it.

Update: There is no 4G version of the Gear S2; T-Mobile offers what they call “4G,” which is nothing but high-speed 3G. However, the 3G watch is worth taking a look at and I was more impressed with it than I thought. I will have more details soon…