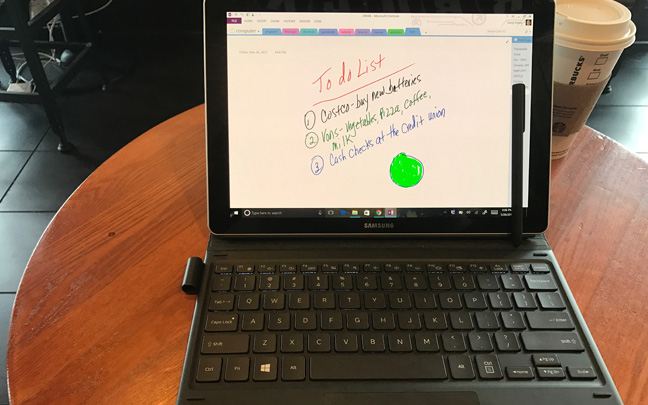 I have been playing with the Samsung Galaxy Book (Kaby Lake, Intel Core i5, 8GB RAM, 256SSD) and like the device a lot more than some critics do. The Verge thinks Samsung made “one step forward and one step back,” while Ars Technica believes that the Galaxy Book is a poor laptop replacement. There are some good reviews out there, but most seem to think the new Galaxy Book can’t match the Surface Pro 4. I disagree.

The Galaxy Book may not be as comfortable as the Surface Pro 4 is to use as a laptop, but it stresses the “tablet” more than the Surface Pro 4 could ever dream of. It really feels like you are using an iPad Pro, except one that runs a full desktop operating system. And it has desktop power — a Kaby Lake Intel Core i5 processor, 8GB RAM, and a 256GB SSD. The best part about the Surface Book, which is priced at $1329 for this configuration, is that it’s Wacom-enabled S Pen offers a near perfect note-taking experience.

Microsoft’s N-Trig Surface Pen is a sore foot in an otherwise great device. Taking notes feels far from smooth, and those who don’t write fast will find that the pen makes their handwriting jittery. The S Pen, unlike the Surface Pen, works very well in OneNote, but it truly excels in Samsung’s desktop S Note App. The stylus has a smooth rubbery feeling, unlike the glass feeling of the Surface Pen. 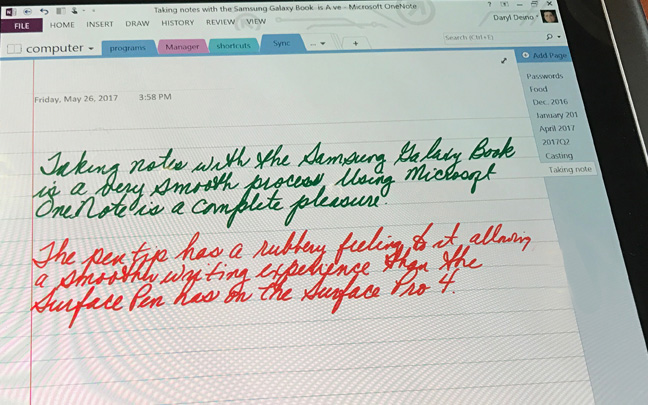 You can take smooth notes on Samsung's new Windows 10 Tablet.

Samsung has been an expert in the note-taking digital age since they first introduced the Galaxy Note in 2011. Many thought that the stylus was outdated, but Samsung proved that a stylus can be helpful if it actually feels like a pen. Samsung didn’t perfect their S Pen until the third generation of the Galaxy Note in 2013. In the unfortunately recalled Galaxy Note 7, the S Pen felt like a pen, marker, pencil, or whatever drawing utility you wanted. It will be interesting to see how Samsung can improve a stylus that is already just about perfect with the upcoming Galaxy Note 8.

Perhaps the Apple Pencil is even better than the S Pen, but it is also a lot larger. Unfortunately, Apple hasn’t made a device, besides the iPad Pro, that is compatible with the Pencil. Perhaps the iPhone 8 will change that. In any case, 2017 is certainly looking to become the year of the digital stylus.

Daryl Deino has been a technology enthusiast since 1995 and has written for several newspapers and technology sites. Please reach him at [email protected]
View all posts by Daryl →
This entry was posted in Review and tagged N-Trig, Samsung Galaxy Book, Surface Pro 4, Wacom. Bookmark the permalink.