The Galaxy Note 4 vs. iPhone 6 Plus 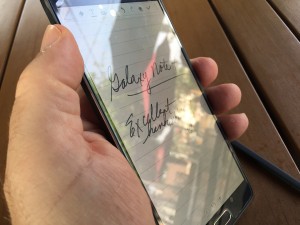 The Galaxy Note 4 is the smartphone of the future.

It’s hard to pick a winner when it comes to Apple and Samsung’s latest offerings. The iPhone 6 Plus is Apple’s most robust smartphone (and first phablet) to date and the Galaxy Note 4 is an excellent update to the already excellent Galaxy Note 3.

I have used both phones extensively and thinking which smartphone to recommend to friends and family has been exhausting. It really depends on the person. For those who aren’t technically savvy and aren’t used to smartphones, I would recommend the iPhone 6 Plus. However, I would have to recommend the Galaxy Note 4 for everybody else.

Apple fans may pull their hairs out over my choice, but they have to step outside their box a little bit. The 1080p 5.5-inch iPhone 6 Plus screen may look wonderful, but it can’t compare to the beautiful quad HD screen on Galaxy Note 4. It’s not so much that the Galaxy Note 4 has more pixels per inch; it’s that the colors and brightness of the screen pop out more, making images and videos appear lifelike. 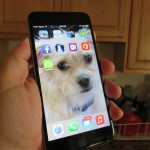 There is no doubt that Apple’s iOS is a more fluid operating system than Google’s Android, but the difference isn’t as pronounced as it was only a couple years back. Not only is Google catching up to Apple in terms of apps, but the operating system really shows its strength on devices such as the Galaxy Note 4. There are many things one can do on the Galaxy Note 4 that one can’t do on the iPhone 6 Plus and having a file system to view is one of them. You can also customize ringtones and other things that Apple tries too hard to control.

Both have excellent cameras, but the one on the Note 4 wins hands down. It doesn’t matter so much that the camera on the Galaxy Note 4 can take 16MP pictures while the iPhone 6 Plus camera takes 8MP snaps. What does matter is that the images, in most lighting situations, come out more crisp and colorful with the Galaxy Note 4. The iPhone 6 Plus takes better shots in very low-lit situations, but that’s about it. The Galaxy Note 4 has a much better front-facing camera for those who are obsessed with selfies.

There is an even bigger difference when it comes to video quality: The Galaxy Note 4 takes 4K videos, while the iPhone 6 Plus takes 1080p videos. One may say that it doesn’t matter since hardly anybody has a 4K television set, but mark my words—that will change in the next year. The Galaxy Note 4 also takes videos with stereo sound, while the iPhone 6 Plus is stuck back in the stone ages with only a mono microphone.

There is something else that will make iPhone 6 Plus owners want to sell their smartphones in order to get a Galaxy Note 4: the Gear VR virtual reality headset. Although there have been some problems with its release, the device promises to usher in a new era of virtual reality once all the bugs are worked out. The Galaxy Note 4 is the only phone this groundbreaking virtual reality device works with.

Because of all this, I am sticking with giving the Galaxy Note 4 the prize. However, one should thoroughly analyze their needs before spending at least ten minutes with both devices, which are easy to try out in several stores. Apple may still clobbering Samsung in terms of sales, but Samsung better understands the future of smartphones.

Daryl Deino has been a technology enthusiast since 1995 and has written for several newspapers and technology sites. Please reach him at [email protected]
View all posts by Daryl →
This entry was posted in Review and tagged Apple, Galaxy Note 4, Gear VR, iPhone 6 Plus, Samsung. Bookmark the permalink.