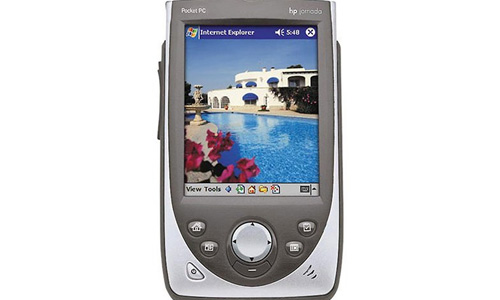 The HP Jornada 560 Pocket PC was a technological breakthrough for 2001.

I had the original color Compaq iPaq Pocket PC in 2000 and loved it. Still, there were some limits in terms of display colors, memory, and a very slow processor. Then, I saw the HP Jornada Pocket PC (HP and Compaq would soon merge to create the HP iPaq) during the end of 2001 and was instantly in love. Not only was there a 16-bit color screen, but the device weighed less and ran a lot faster.

It was also the very first Pocket PC to run Pocket PC 2002, which would soon just be called Windows Mobile. It was really like having a computer in your pocket — at least back then. I would put in a bunch of videos on a Compact Flash card and enjoy them during my lunch breaks. My coworkers though the whole device was amazing and futuristic. At the time, PC Magazine gave the device four stars.

“If you’ve wondered in the past about the punky color and design trade-offs of Hewlett-Packard’s keyboardless PDAs, rest assured that the new HP Jornada models are much more pleasing to the eye and hand.”

Even if you didn’t like using the stylus, there was a keyboard accessory you could buy for the Jornada. Even better was a thumb keyboard that you could type your office documents on, even if doing this took a lot longer than typing it with a regular PC.

A digital camera CF expansion card allowed you to take pictures with your Jornada.

You want to know the coolest thing about the HP Jornada? You could have actually bought a Compact Flash camera attachment that took 640 x 480 pixel resolution photos — an amazing feat for late 2001. I specifically remember how right after mine arrived, I took my golden retriever to the dog park so I could take pictures of him show off my new camera to the other people at the park. People thought I was really cool. The dogs were rather annoyed with me.

Perhaps the most useful aspect of the HP Jornada was the fact that I was able to take handwritten notes on the Pocket PC Note app. The digital ink wasn’t really smooth — but being able to suddenly jot things down back then and not have to worry about losing notes was very futuristic and useful.

I can do a lot more things with my iPhone 6 Plus now than I could have ever dreamed of with the HP Jornada 560. Still, the device holds an emotional historic place in my technologically saturated mind.

Daryl Deino has been a technology enthusiast since 1995 and has written for several newspapers and technology sites. Please reach him at [email protected]
View all posts by Daryl →
This entry was posted in Review and tagged Pocket PC, Technology Flashback. Bookmark the permalink.