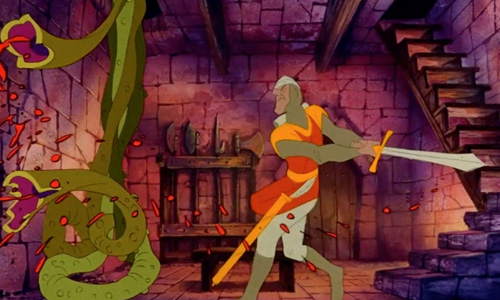 It was November of 1983. I went to go visit All Star Bowl with my friends Paul and Aaron. Paul’s parents dropped us off there on a Friday night. I was expecting to play Donkey Kong Jr., my favorite arcade game then. I also liked Mr. Do!, which was sort of a rip-off of Dig Dug.

When we walked in the arcade room, there were at least six or seven people staring at some game like a teenager would stare at his first nude magazine. I couldn’t understand why people were so excited until I saw they were actually playing a cartoon!

Dragon’s Lair overcame the limitations of regular video games (at the time) because it was the first commercial laserdisc video game. Because of this, the gameplay was limited. Still, the video game was ahead of its time. The concept was considered cool for the time: The main character, Dirk the Daring, sought to rescue Princess Daphne from Singe the Evil Dragon. Even though the actions were simple (jump, move, or slash), Dirk would be dead if the action wasn’t done at just the right time.

Dragon’s Lair was eventually released to video game systems, even though the video game crash had just hit. One of the best ports of the game was for the ColecoVision Adam computer system. 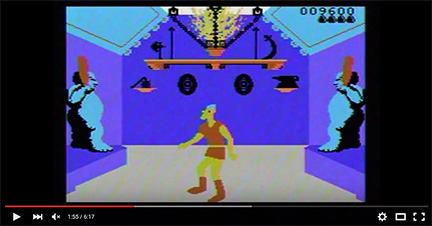 ColecoVision's Adam had an excellent version of Dragon's Lair.

Dragon’s Lair for Adam was released in early 1985, when the excitement over both Dragon’s Lair and Coleco’s Adam computer was practically non-existent. Still, the game was impressive for a 1985 computer game. There was no way Coleco could have re-created the cartoon, but they did produce excellent graphics. The gameplay was also more involved than the arcade version. The final scene where Dirk saves the Princess is one of the best scenes (in terms of graphics and gameplay) on a video game in the early to mid 1980s.

Those of you who are into nostalgia can download Dragon’s Lair for any iOS device. There is one warning: You may not experience the “coolness” you did if you tried the game more than 30 years ago. It’s like watching E.T. again and ruining your childhood memories since the scenes don’t appear as sad when you are an adult.

Dragon’s Lair will always remain a classic video game. Its release failed to save the crashing video game industry at the time, but it is always thought of as innovative and influenced several video games that would be released in the near future. If you never played Dragon’s Lair, you are missing out on a part of video game history.

Daryl Deino has been a technology enthusiast since 1995 and has written for several newspapers and technology sites. Please reach him at [email protected]
View all posts by Daryl →
This entry was posted in Review and tagged Arcade, Technology Flashback. Bookmark the permalink.