The Creative ZEN Personal Media Center flopped when released in 2004.

In January of 2004, Microsoft introduced the PMC (Portable Media Center) at CES. It was basically a portable version of Windows Media Center, where one could easily navigate the operating system to choose a movie, song, or even a picture. It looked like it was going to be the next big thing.

The first Portable Media Center device to arrive was the Creative Zen PMC, which hit the United States shores in September of 2004. CNET gave it three-and-a-half stars.

“Eight months after its announcement, the Creative Zen PMC is finally here. Despite its bulk, the player is solid, but it’s the Microsoft Portable Media Center software that deserves most of the praise.”

Despite the very good review, CNET added that the Creative Zen didn’t have a built-in kickstand and that the screen was very reflective outdoors. As an owner of this device (for at least a week before returning it), I definitely remember it being very hard to view outdoors. 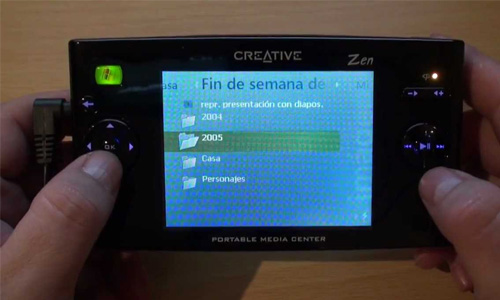 I also remember the Creative Zen was way too bulky. This wasn’t a device you could easily fit in your jeans and if you did, someone would definitely be suspicious that you are just happy to see them. It had a large 3.8-inch screen, but I remember the 320 x 240 pixel resolution was low enough that photos didn’t look real. Sony’s CLIÉ devices had 3.5-inch 480 x 320 pixel resolution screens that looked much better. Still, the Creative Zen PMC had 20GB of internal storage. That was a lot for 2004!

I think the most annoying thing about the Creative Zen PMC was the fact that all media files had to be converted to WMV format. It came with a program that allowed for converting files to the format, but it took way too long. Besides, WMV has always been one of the worst video formats. I also remembering a lot of my songs not syncing if they weren’t encoded in a certain way, whereas the iPod would sync every single song I threw at it.

For the reasons mentioned above, the Creative Zen PMC didn’t last long in the stores and there weren’t many PMC models afterwards. There was the Samsung Yepp YH-999, which was designed better and also worked better. However, there wasn’t enough interest in the PMC for any companies to make media players based on its operating system. Unfortunately, Microsoft lost a lot of money on the PMC idea and things would just get worse with the Zune media player, released at the end of 2006. It would take years for Microsoft to revive its fallen brand.

Daryl Deino has been a technology enthusiast since 1995 and has written for several newspapers and technology sites. Please reach him at [email protected]
View all posts by Daryl →
This entry was posted in Video and tagged Microsoft, PMC. Bookmark the permalink.