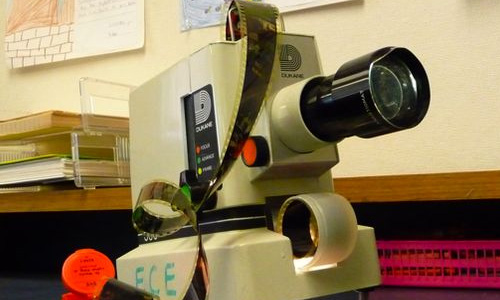 I can remember it as if was yesterday. I would walk into my 6th grade history class being very nervous. I had a teacher who basically liked to make me miserable. However, when I walked in and saw a filmstrip projector, my body felt intense joy. Even if the filmstrip didn’t provide entertainment, it was still a break from the usual boring stuff.

My teacher always had a difficult time setting things up and at times, the audio wasn’t in sync with the picture. Some projectors had a tape player installed under the projector, but — most often — one had to use a separate tape player. Sometimes, the projector ran automatically and a tone from the audio made it advance. Other times, one would have to press a button to forward the projector to the next slide. My teacher was often too lazy or used this time to grade papers. She would usually have another student press the button.

As Wikipedia points out, filmstrips often provided a much less expensive alternative to the 16mm projector. There was very little storage space required and it was easy to rewind for the next use.

I can’t seem to find information about a particular filmstrip that was played in my fifth grade Science class. It showed the different planets and the voice on the accompanying tape indicated that this was just one solar system; there are an infinite amount of others that we haven’t made contact with. I thought of all the possibilities and that, within ten year, we would be able to travel to another solar system. Unfortunately, it hasn’t happened yet. 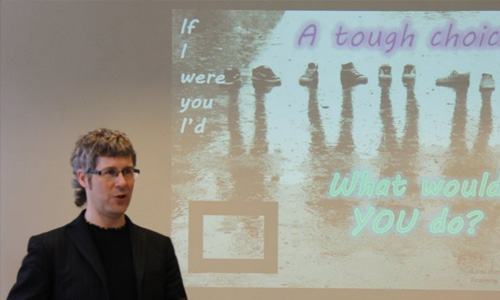 PowerPoint became popular for classrooms in the late 1990s.

The technology revolution of the 1990s changed everything in the classroom. When I became a teacher, we had VHS players and even DVD players attached to a large-screen television set. :When the early 2000s arrived,  I would sometimes attach my laptop to the television set and play PowerPoint presentations. Even though the technology was different, the kids enjoyed the alternative to hearing their teacher speak all period just as I did when I was a student.

One can bet that virtual reality headsets will soon become an educational tool to help transport kids to different countries, planets, and even a virtual reality Jurassic Park. Who knows — it’s possible that showing up in a classroom will no longer be required in the near future.