A lot has been said about the new PS5. It’s an excellent gaming system that is still hard to find, although stock is trickling into many places. However,  I still prefer the Nintendo Switch. Even though the PS5 is far more capable, it’s just not as fun. And there could be nothing more fun than the latest release, Super Mario 3D World + Bowser’s Fury.

The game is cute, riveting, action packed, and helps you escape from this Covid-19 world. It’s the best game in the Super Mario series besides Super Mario Odyssey Even though it launched on the WiiU in 2013, the game hasn’t reached its full potential up until now.

Seeing 3D World on a portable device makes the game feel more approachable. Nintendo uses the same formula as most of its other Mario games, but strikes it up a notch or two. The characters, who can become cats, are more animated than ever. There are also the Cat Goombas, Koopa Troopas in underpants, and other creatures that you feel guilty pouncing on. 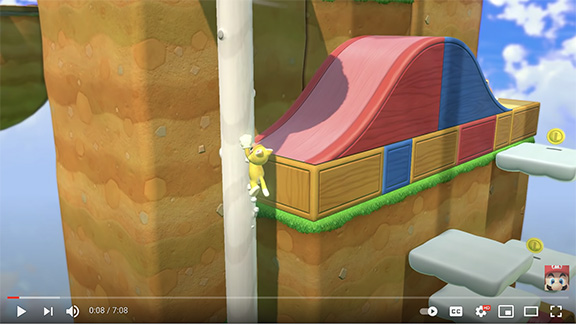 The gameplay is rather simple, but requires some keen movements and a careful set of eyes. It does get more difficult as you go on, especially when you land in World 4. If your child becomes addicted to this, at least their hand and eye coordination will be sharpened.

The biggest surprise is the addition of Bower’s Fury, a new mini-adventure that will have you on the edge of your seat. It’s more than just a side game, even though most Mario experts can get through the complete game in four to six hours. I can’t really understand the plot, but know that enough Cat Shines to fight against the final boss sequence are needed. You even get to have Bowser Jr. as an ally in calming down his father.

I’ve noticed that the frame rate, at least in handheld mode, varies as slight lag appears (when running) at times. This is the first time I’ve noticed any lag in a Nintendo Switch game. Still, it doesn’t take away from the amazing fun or amazing frustration when a fiery Bowser appears just as you think you are about to complete a level.

I have yet to play these games with the Nintendo Switch Pro Controller, but the thought didn’t even occur while playing with the regular ones. Everything feels smooth and responsive. There is never any lag when pressing the buttons.

With the exception of virtual reality experiences, it’s difficult to think of a gaming experience that convincingly transports you into another world as much as this one does with the Nintendo Switch. This new world may be crazier than the real one, but it’s guaranteed to bring you nothing but joy.

Daryl Deino has been a technology enthusiast since 1995 and has written for several newspapers and technology sites. Please reach him at [email protected]
View all posts by Daryl →
This entry was posted in Review and tagged Nintendo Switch, PS5. Bookmark the permalink.