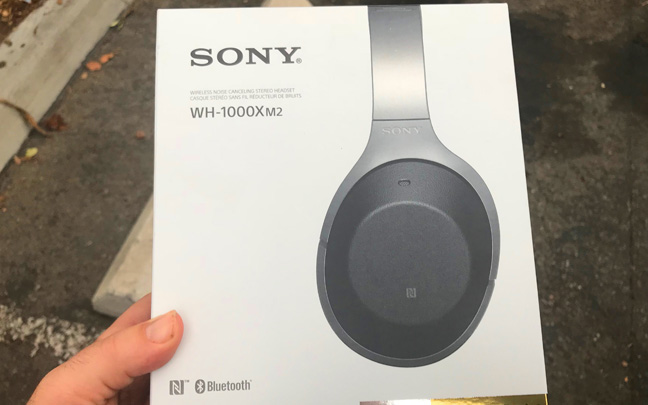 Sony has been hitting all the high notes lately when it comes to Bluetooth wireless headphones. This blog has recently raved about the W1-1000X wireless neckband headphones and praised the WF-1000X wireless earbuds, though there were some reservations due to connection issues.

There isn’t much of a design difference between the MDR-1000X and the WH-1000MX2 headphones, except the latter now have a grainy substance on the side of the cups. This helps make it easier to use your finger to control volume, skip tracks, pause tracks, talk to Siri, answer a call, and other functions. There are also two buttons on the left ear pad instead of three — Ambient mode and noise cancellation can now be switched with the same button.

There is an Ambient mode which allows you to be able to  hear traffic and voices, and an app allows you to control just how much outside noise you hear. Then, there is the Adaptive Sound Control mode, which supposedly adjusts the ambient sound based on your current activity. It works better than it did on the MDR-1000X, but it still takes too long. Setting up the amount of ambient sound needed works better when setting it manually on Sony’s Headphone app, which is available for iOS or Android devices.

The WH-1000MX2 has the same sound stage as all of Sony’s recent headphones — heavy (but not too domineering) bass, emphasized highs, and present mids. The only time I heard any slight distortion (in the lows) was when listening to “Candy Shop” by 50 Cent. Still, listening to the the song was an ear-kicking delight.

If you like the signature Bose sound and don’t mind a little extra bass, chances are you will like the sound better on the WH-1000MX2 more than competing headphones by Bose and Sennheiser. Sony kicks you in the ear with the bass, and this is perfect when listening to EDM or R&B. When listening to soft rock, it can be a touch annoying.

Then, there is phone quality. While you won’t sound as clear as you do on Bose’s QC35s, the quality is more than adequate. A friend even told me that I sounded fine (if a little ruffled) when talking to him from a loud Starbucks. The good thing is that noise cancelling still works when you are on a call, so you don’t hear the other people much when you talk.

Sony has pretty much thrown everything at the kitchen sink with the WH-1000MX2, and almost everything has landed safely. Sony’s latest wireless noise cancelling headphones are the best overall high-end cans on the market, easily beating competitors like Bose, Beats, Sennheiser, and Bowers & Wilkins.

Daryl Deino has been a technology enthusiast since 1995 and has written for several newspapers and technology sites. Please reach him at [email protected]
View all posts by Daryl →
This entry was posted in Review and tagged Bluetooth Headphones, Sony MDR-1000x, Sony WH-1000MX2, Wireless Headphones. Bookmark the permalink.