Screen Protectors are Affordable and Necessary

Think of it this way: Would you put a “water-resistant” smartphone, such as the Samsung Galaxy S5, at the bottom of the ocean and expect it to work perfectly when bringing it back up? Would the “water-resistant” label make you want to take a bath with the device? Chances are that doing these things would break your device. Now, if the device is exposed to rain for a brief moment or water is spilled on it, chances are it will be okay.

The same theory applies to scratch-resistant screens, except the chances of resistance are even lower. Furthermore, materials such as sand and sharp plastic scratch screens more easily than harsher materials. It’s hard to tell what will scratch your screen and what won’t. But a screen protector on a scratch-resistant screen will severely reduce chances you will notice even the slightest hairline scratches. 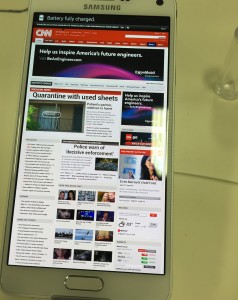 Samsung Galaxy smartphone screens, especially the ones on Galaxy Note units, are born to scratch. If you don’t believe me, wash your screen and take it out in direct sunlight. You will notice some hairline scratches you thought were just thin smudges you can wipe off. You may even see permanently engraved words from your Galaxy Note stylus on your device.

I have been disappointed with hairline scratches on my Galaxy S3 and Galaxy Note 3 units. The good news is that these scratches aren’t usually visible in normal lighting situations. The bad news is that since you know the scratches are there, you will always notice them. This can be rough for those who obsess over their electronic devices.

I originally thought the iPhone 6 screen would be different. However, my eyes noticed minor hairline scratches on four different screens that were tested. The owners of the tested phones all claimed they never dropped their phones or even kept them in the same pockets as their keys, wallets, etc. It doesn’t matter.

People seem to think that only expensive screen protectors (the ones usually over $20) are the only useful ones. This is not true; you can usually buy a pack of clear screen protectors for under $20 and sometimes under $15 at regular stores. Most screen protectors on Amazon.com cost less then $10. You don’t need to be a rocket scientist to put the protectors on; they just take a little bit of time and concentration.

Screen protectors may add a slight layer of cost to an already expensive purchase of a smartphone or tablet. They may even require a little bit of time to put on your device. However, screen protectors are no longer optional; they are absolutely necessary.