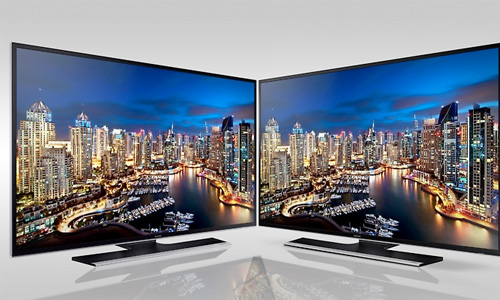 I recently reviewed Vizio’s attempt at a 43-inch UHD 4K television set and was not very impressed. I returned the $579 television set and replaced it with Samsung’s 40-inch 4K set, which you can buy on sale now for $699 at Best Buy. The extra $130 is worth it as Samsung’s UHD television is amazing, especially for the price.

The most important thing about a television set is the screen. Imagine taking the screen from the Galaxy S6, blowing it up, and putting it on a televisions set. The screen looks beautiful and it is easy to change screen modes to fit your taste. I like using Dynamic mode with the color saturation decreased a little bit. The contrast ratio on all modes is outstanding.

Like the Vizio set, the speakers aren’t on the front since the bezel around the screen is so thin. Unlike the Vizio, the sound isn’t distorted. There are five unique settings: Standard, Music, Movie, Clear Voice and Amplify. I prefer the Standard mode, but audiophiles may prefer the Movie mode with surround sound.

I was disappointed with the fact the Vizio 4K television set didn’t play some video formats, especially H.264 MP4 4K videos. This isn’t the case with the Samsung 4K television, which plays every format I have thrown at it. The 4K home videos, shot with my Samsung Galaxy Note and the Galaxy S6 Edge, look absolutely outstanding. It’s hard to believe how a video can look so crisp — you have to see it to believe it. 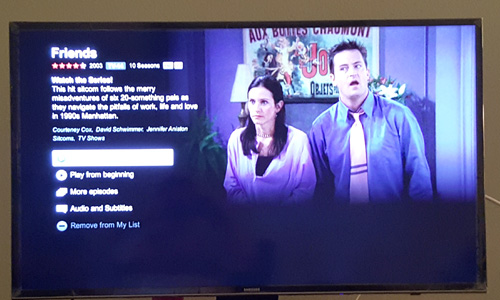 Netflix is a pleasure to watch on Samsung’s 4K TV.

There isn’t a lot of 4K content, but Samsung has the latest M9 chip (which Vizio lacks) that allows you to play all of YouTube’s 4K videos. Some of them, especially the ones filmed with the GoPro Hero4 4K camera, look amazing. Others shot with smartphone cameras are sometimes too shaky to enjoy.

Samsung’s 4K television set doesn’t just play 4K; it upscales 1080p videos very well, especially when using Netflix. It’s a shame that Netflix doesn’t have that much 4K content, but that’s likely to change this year. I’ve noticed that using Netflix on the Samsung television is a better experience that it was on the Vizio; there have been no pauses whatsoever playing the content.

If you are an early adopter of everything 4K and you don’t need a huge television set for your living room, Samsung’s 40-inch 4K Ultra HD television set is a great buy. If you are still on the fence in regards to 4K, wait until Christmas for this 4K television and others to go down in price.

Daryl Deino has been a technology enthusiast since 1995 and has written for several newspapers and technology sites. Please reach him at [email protected]
View all posts by Daryl →
This entry was posted in Review and tagged 4K, Samsung. Bookmark the permalink.