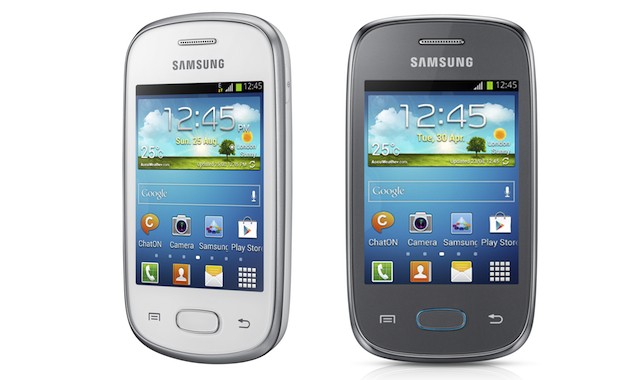 Samsung just announced two low-end Android smart phones at the Samsung Forum in South Africa, which are aimed at the most budget-conscious buyer.

The Galaxy Star is equipped with a 1GHz processor and 512MB RAM, running Android version 4.1.2 (Jelly Bean). The screen is a 3 inch one with 240×320 resolution. It comes with 4GB internal storage which could be expanded up to 32GB through the micro SD slot. Also it features a 2MP camera and Dual SIM slot, which is a hot feature in Asia especially China market.

The Samsung Pocket Neo specification is pretty similar to the Galaxy Star. It comes with
same 3 inch screen with 240×320 resolution, and same 4GB internal storage which could be expanded up o 32GB through the micro SD slot. The only difference is, the Samsung Pocket Neo is equipped with a 850MHz processor, which is lower than Galaxy Star. It will run Android version 4.1.2 (Jelly Bean) as well, and feature optional Dual SIM unctionality. Unlike Galaxy Star, it has GPS.

Samsung hasn’t provide price or release date of Galaxy Star and Pocket Neo, but we’d expect both will be geared towards emerging markets. While neither phone is particularly exciting, they’re essential for Samsung to help maintain its position as the world’s No. 1 phone manufacturer.

This entry was posted in Tech News and tagged Android, Samsung, Smart Phone. Bookmark the permalink.