I reviewed the over-the-ear Sennheiser Momentum 2 On-Ear Wireless headphones back in March. At first, my review was rather positive. Then, after using the headphones more, I disliked them so much that I had to return them. 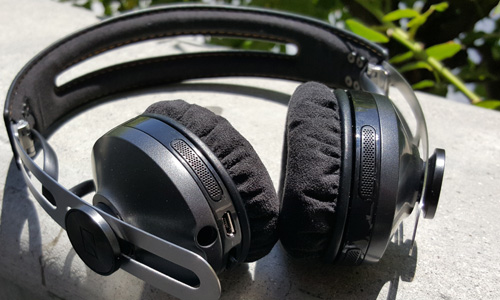 As much as I tried to appreciate the “balanced bass,” I realized there wasn’t really a lot of it. I read other reviews that said the bass could be overbearing. I’m convinced I had a defective unit. So, here I am trying the Wireless Momentum Bluetooth headphones again – but this time, I have the over-the-ear versions which are $100 cheaper at $399.95.

The first thing I noticed is how heavy the bass is. It feels like someone is pounding on your ears. It’s not bad at all, but I wish the bass was slightly less overbearing. However, the bass produces a high quality thump – not the distorted kind cheaper headphones are known for. The middle and high ranges of sound are adequate, even if the middle disappears somewhat – this is noticeable when listening to EDM music.

In terms of wireless sound, the M2 On-Ear Wireless are the second best and only beaten by the Wilkins and Bowers Bluetooth headphones. They still sound like Bluetooth headphones, but good ones. The Wilkins and Bowers sound as good as wired headphones – this is something Sennheiser, Bose, Beats and Sony haven’t been able to match. However, the M2 On-Ear Wireless have other advantages over the other brands. 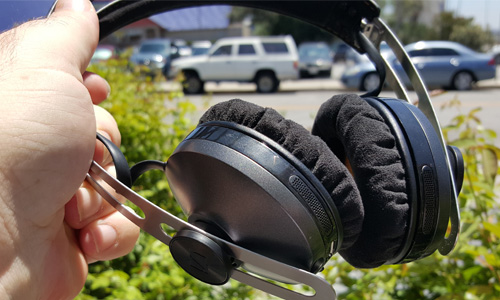 The M2 On-Ear Wireless headphones have some Bluetooth connection problems.

For one things, the NoiseGuard technology provides better noise cancellation than any other Bluetooth headphones currently available. The noise cancellation isn’t as good as it is on the Bose QuietComfort 25 headphones, but those are wired. It is, perhaps, the most impressive feature of the M2 headphones.

Then, there is comfort. One can tell a lot of effort went into making the M2 On-Ear Wireless. The stitched-leather pads feel almost non-existent on the ears and it’s even comfortable to have the headphones on without listening to music. The M2 On-Ear Wireless can be tightly adjusted to fit almost any type of head. Unlike other headphones, these don’t come off at the gym when I bend backwards to do exercises.

There is one sort-of-serious problem with the Bluetooth connection. In some open areas, the Bluetooth will “scratch” in and out. Sennheiser has publicly acknowledged the problem and has recalled all M2 Wireless headphones. However, the problem really isn’t severe and it wouldn’t really be a disability if you buy these before Sennheiser has a fix – that may take a long time.

Bluetooth headphones have come a long way over the past three years. They went from being a niche audio product category to something mainstream. The Sennheiser Momentum 2 On-Ear Wireless headphones aren’t the best ones out there. However, for the price and sound quality, they may be the best buy.

Daryl Deino has been a technology enthusiast since 1995 and has written for several newspapers and technology sites. Please reach him at [email protected]
View all posts by Daryl →
This entry was posted in Review and tagged Bluetooth Headphones, Sennheiser. Bookmark the permalink.