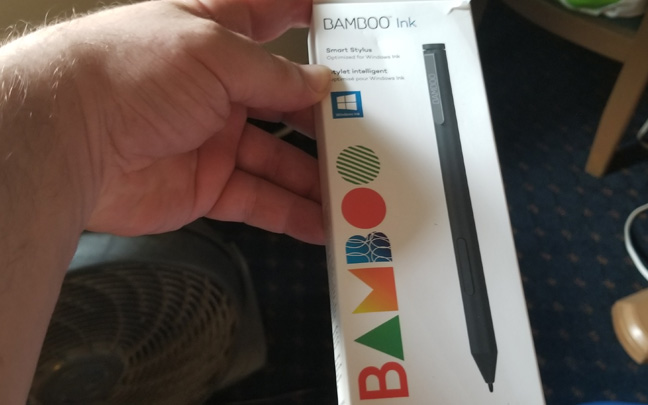 Ah, the Microsoft Surface Pro 4. It’s such an iconic device — beautiful screen, outstanding keyboard, excellent hybrid of laptop and tablet features, and improved battery life from when it first came out. Then, there is the Surface Pen — an absolute disappointment that doesn’t bother most people since they never use it.

The truth is that the Wacom Pen on the Surface Pro 1 and 2 was better, especially for people who take handwritten notes. As mentioned in a recent post here, the N-Trig Surface Pen writing comes out jittery and squiggly. It doesn’t feel like you are writing on paper like it does with the S Pen on Samsung’s Galaxy Book. Fortunately, Bamboo just released a new Windows 1o stylus that will work with devices made for either Wacom or N-Trig writing. And although spending an additional $69 on a stylus is a lot to ask for after already spending over $1000 on the Surface Pro, it is worth every penny.

In the picture below, I wrote very slowly with the Surface Pen in blue ink. Then, I wrote with the same thickness  in red ink using the Bamboo stylus. At first glance, you might say that both lines look squiggly, but there is noticeably less squiggle using the Bamboo. 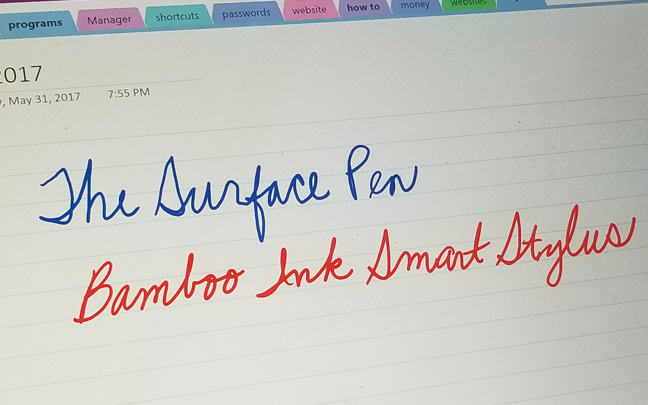 The truth is that the faster you write with both, the smoother your handwriting will come out. But while the Bamboo pen approaches Wacom levels of smoothness, the Surface Pen still feels uncomfortable — at least for those who have been taking handwritten digital notes for years.

There is no eraser on the Bamboo pen; you need to press a button on the side in order to activate the eraser capabilities. Still, it’s only a very minor fault, and it can’t even be considered a flaw. The pressure-sensitive Bamboo ink makes up for anything else the pen lacks.

This isn’t to say that the Bamboo Ink Smart Stylus makes the perfect digital writing device. I still think the S Pen and the Apple Pencil provide a more realistic inking experience. But after you spend several frustrating hours using the Surface Pen, using the Bamboo Ink Smart Stylus feels like you won the lottery. It will be interesting to see if Microsoft’s new Surface Pen, which will sell as an optional purchase (unlike previous pens that were included with the Surface Pro), can finally make the Surface Pro the ultimate inking device.

Daryl Deino has been a technology enthusiast since 1995 and has written for several newspapers and technology sites. Please reach him at [email protected]
View all posts by Daryl →
This entry was posted in Review and tagged Apple Pencil, Bamboo Smart Stylus, S Pen, Surface Pen. Bookmark the permalink.