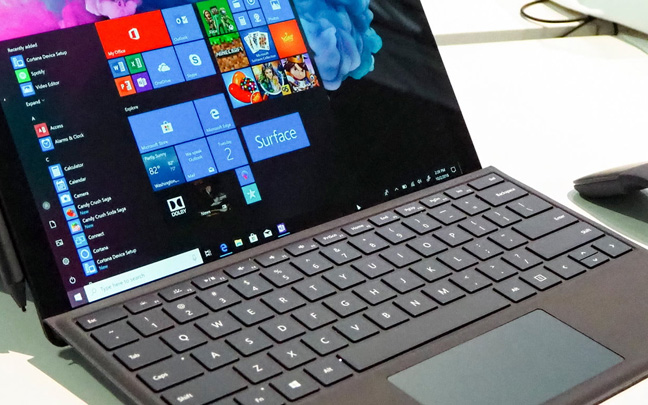 Microsoft has led the laptop/tablet hybrid game since 2013, but they may be falling behind. As The Verge explains, the company just announced the long-awaited Surface Pro 6

“The latest tablet / laptop hybrid has a familiar design, but updated internals. Microsoft has refreshed the Surface Pro 6 with Intel’s 8th Gen processors, and a new matte black finish.”

The support for quad-core processors is a big deal as we’ve seen the difference when using the new MacBook Pro or even the new Surface Book. But…NO USB-C port? What is Microsoft thinking? We excused the 2017 Surface Pro for not including the port, but that’s because that came out in June of 2017 when the USB-C port wasn’t completely mainstream yet. One year and three months makes a huge difference. Now, every major computer has at least one USB-C port, if not two or three.

One of the reasons this is disappointing is because it means we still have to use Microsoft’s outdated Surface Connector. Another reason is because USB-C provides several benefits such as faster data transfer, more efficient charging, and great support for connecting to larger displays, especially if it is a Thunderbolt 3 USB-C port.

The good news is that hands-on reviews of the Surface Pro 6 are pretty good so far.

“The Surface Pro 6 brings forward the carefully honed design of earlier models and bumps the speed of the computer significantly. It doesn’t try to revolutionize the Surface Pro’s now well-known look. It doesn’t need to,” claims Jeremy Kaplan of Digital Trends, adding that the battery life has improved.

The fact still remains that compared to other companies,  Microsoft has done the best job of combining a laptop and tablet into one device without sacrificing too many aspects of both. Unlike the iPad, which emphasizes the tablet part, Microsoft has always emphasized the laptop aspect more. Those who purchase the Surface Pro 6 certainly won’t be disappointed, but it’s a shame that Microsoft couldn’t do more for its flagship device.

Daryl Deino has been a technology enthusiast since 1995 and has written for several newspapers and technology sites. Please reach him at [email protected]
View all posts by Daryl →
This entry was posted in Tech News and tagged Microsoft Surface Pro, Surface Pro 6, USB-C. Bookmark the permalink.