OneNote for Android is easy to use.

There are plenty of note-taking apps for Android smartphones: Evernote, S Note (for Samsung devices), Simplenote, Google Keep, etc. But the best app for notes, especially if you have a device with a digital stylus, is Microsoft OneNote.

If you asked me just six months ago, I would have gone with Evernote. However, Microsoft began allowing one to use a digital stylus a couple months back in order to take notes with their popular note software application. Even if your device doesn’t have a digital stylus (and most likely it doesn’t unless you have a Galaxy Note), you can use your finger or a capacitive stylus. The writing comes out really smooth and it feels almost as if you are writing on a pad of paper with a pen. 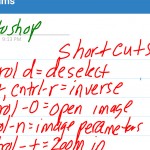 Microsoft OneNote has been used with tablets since they first came out in 2002. It used to be the most popular note-taking software until Evernote came along. The best part of OneNote has aways been that your notes are organized just as a notebook would be. There are several tabs in each Notebook (representing separate tags in the category) that you just touch in order for the note you need to appear.

OneNote also offers several templates: wide-line paper, college-rule paper, to-do lists, graph paper, etc. You can also download several templates as well. The desktop version of OneNote allows you to insert images, PDF files, PowerPoint files, etc. The latest Android version allows you to add images and videos, but not PDF or PowerPoint files. Still, you can view these on your Android device if you add them through the desktop version. 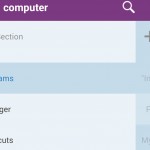 The best thing about OneNote is how easily it syncs with all of your devices. You need a free Microsoft OneDrive account and after you sign in on each device, your notes are automatically updated. Evernote is supposed to easily sync notes from all your devices, but it doesn’t always work that smoothly.

There is one main disability to OneNote for Android: You cannot search written notes. This is because all handwriting, no matter how good it looks, is saved as an image rather than digital ink. This alone has deterred me from using OneNote as my main note-taking app on my Galaxy Note 4. S Note, overall, is inferior to OneNote. However, it saves all your handwriting as searchable ink and can even convert it to text if you like.

Microsoft has told me that searchable handwritten notes are a possibility in the near future for OneNote on Android devices. For now, it’s just exciting to marvel how far Microsoft has come with OneNote for Android in the past three years.

Daryl Deino has been a technology enthusiast since 1995 and has written for several newspapers and technology sites. Please reach him at [email protected]
View all posts by Daryl →
This entry was posted in Review and tagged Android, Evernote, Microsoft, OneNote. Bookmark the permalink.