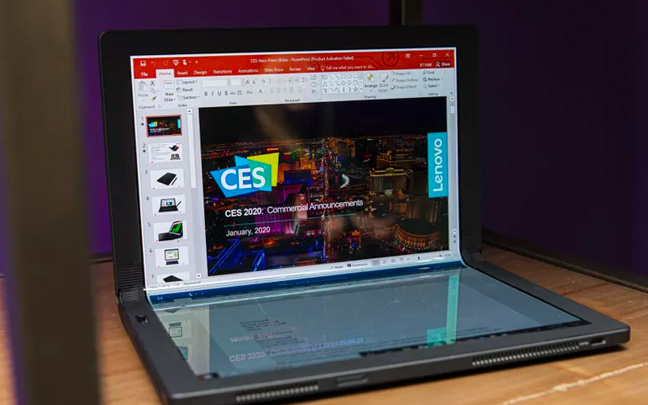 The Lenovo ThinkPad X1 Fold is now available for purchase.

Foldable phones have come a long way, as evidenced by the release of the Samsung Galaxy Z Fold 2. Now comes the release of the first foldable laptop, the Lenovo ThinkPad X1 Fold. It’s a premium device with a leather back, a hinge, somewhat thick bezels, and a nearly 2K 13-inch screen that folds. According to just about everyone who has seen it, the device at least looks beautiful.

YouTube guru Marques Brownlie (MKBHD) finds the product fascinating at first, but notices that there isn’t much functionality here that isn’t on a device like a Surface Pro. He also says that there isn’t really enough software that takes advantage of the new hardware. He does think that a product like the ThinkPad X1 Fold could become mainstream in the near future.

“An Intel Core i5-L16G7 Processor powers the Thinkpad X1 Fold’s base unit with integrated graphics, with 8GB memory, and a 256GB SSD. It’s enough to run the basics – web browsing, media consumption, and general productivity apps like Microsoft Office. But can be quite challenged for more resource extensive operations like video editing. And of course, hardcore gaming isn’t for this laptop,” says Paolo Lacuna of Yahoo News.

A friend of mine indicated his lack of excitement when pointing out that all laptops are foldable devices. He’s obviously correct, but it’s not the same thing as having an actual screen that folds. But do people really need that on a laptop? A foldable screen sounds more like a consumer need on a smartphone than a laptop.

Don’t get me wrong; I would love to get my hands on the ThinkPad X1 Fold, and I have actually requested a review unit from Lenovo. But if I don’t get one, I’m not going to be upset. Perhaps, in three more years, the software will be able to support the hardware. For now, I’m actually looking more forward to seeing the Surface Pro 8.

Daryl Deino has been a technology enthusiast since 1995 and has written for several newspapers and technology sites. Please reach him at [email protected]
View all posts by Daryl →
This entry was posted in Video and tagged Foldables, laptops, Lenovo. Bookmark the permalink.