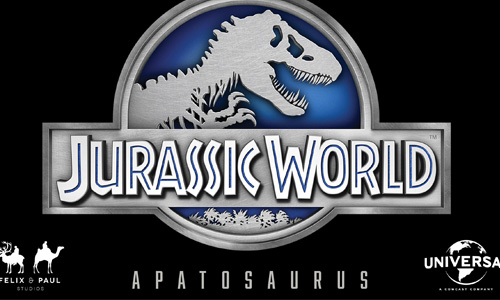 Jurassic World: Apatosaurus has been available since this summer, but I’ve only been able to try it out recently with the commercial version of the Gear VR, which I gave my first impressions about last week.

That was before I tried out the Jurassic World app and my impressions about the device have improved thanks to this app and some other amazing ones (which I’ll talk about in future posts). Jurassic World proves what a great out-of-world (and out-of-just-about-everything) experience VR can offer. 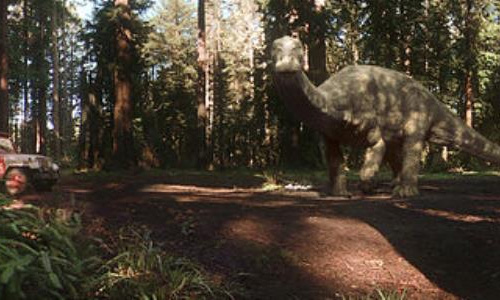 This looks a lot better while wearing the Gear VR!

When the app stars, you are watching an Apatosaurus dinosaur sleep. When you look around, you notice the green grass, the trees, and the car you drove in on. You only start to get bored for a couple seconds and start to think that’s all there is to the experience. However, the Apatosaurus soon wakes up and comes over to you. HE LOOKS AT YOU STRAIGHT IN THE EYE! Nothing to worry about though, since he is as cute as a large dog.

Then, the Apatosaurus stands up on his rear legs and looks like he is about to pounce on you. However, you soon realize that he is just standing up to eat some leaves from the tree above. He goes back to rest and you just realize you’ve had the coolest tech experience of your life. You really have to go to your local Best Buy and ask them if you can try the Gear VR with this app. It will be worth your ride over there.

What differentiates this experience from previous mediocre VR apps is that you’re not only surrounded by high definition images, but the sound is just perfect. The grunt and howl of the Apatosaurus is as realistic as anything, although I have to admit never running into an Apatosaurus in real life. `

During Thanksgiving weekend, I had several family members try this app out and they were blown away by this as well. My brother remarked that they should do a whole movie “like this” and I agree. Within a year, we will start seeing interactive virtual reality movies, but they won’t reach their potential for at least three more years. I remember, six years ago, thinking how realistic the 3D was in the movie Avatar. However, Jurassic World: Apatosaurus is not only realistic, but it actually puts you right in the center of the action. Hopefully, they’ll make a more dangerous app called Jurassic World: Velociraptor.

Daryl Deino has been a technology enthusiast since 1995 and has written for several newspapers and technology sites. Please reach him at [email protected]
View all posts by Daryl →
This entry was posted in Review and tagged Gear VR, Virtual Reality. Bookmark the permalink.