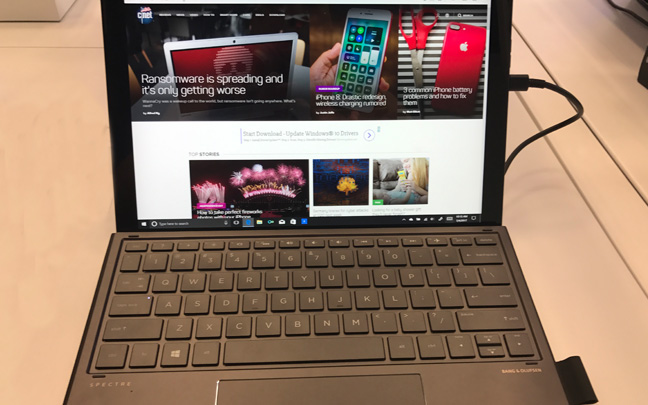 HP has just released the new HP Spectre x2,  a beautiful laptop/tablet hybrid that certainly gives the new Surface Pro a run for its money. I played around with the unit for almost ten minutes, and though it’s not long enough to provide a full review, I can easily say that HP continues to improve their products. The 2017 Spectre x2 is certainly a device you should look at before buying the Surface Pro.

The Spectre x2 keyboard, which comes with the device, is solid.

Then, there’s the keyboard that actually comes with the unit. Oh, and HP includes a digital (N-Trig) pen with their new laptop/tablet hybrid as well. The keyboard is solid and easy to attach/detach. The keys have solid travel space with an industrial feel rather than the rubbery feeling you get when pressing the Surface Pro keys. And the Spectre x2 can easily be put on your lap. The tablet part bends back pretty far, but not as much as the one on the Surface Pro does.

Everything seems to indicate that the HP Spectre x2 would be the perfect laptop/tablet hybrid. Then, unfortunately, there is the battery life. The unit I was using depleted 10 percent of its juice in almost 10 minutes, though I admit brightness was almost completely turned up. However, other reviews suggest that the battery life on this new Surface Pro competitor is a problem, but not a complete deal killer.

PC World says the performance is marred by mediocre battery life, and they’re not the only ones to say so. According to most sources, a majority of users could get six hours of battery life with the Spectre X2. That probably means power users can expect around 5 hours. In 2015, that was great — but this is 2017.

The Surface Pro 4  had a very similar battery  life after an update, and it was barely passable. For all the criticism that the new Surface Pro has endured for not being much different than the Pro 4, Microsoft did improve the battery life by at least two hours. Because of this, Microsoft’s laptop/tablet hybrid is still the one to beat, although the HP Spectre x2 certainly comes close.

Daryl Deino has been a technology enthusiast since 1995 and has written for several newspapers and technology sites. Please reach him at [email protected]
View all posts by Daryl →
This entry was posted in Video and tagged HP Spectre x2, N-Trig, Surface Pro. Bookmark the permalink.