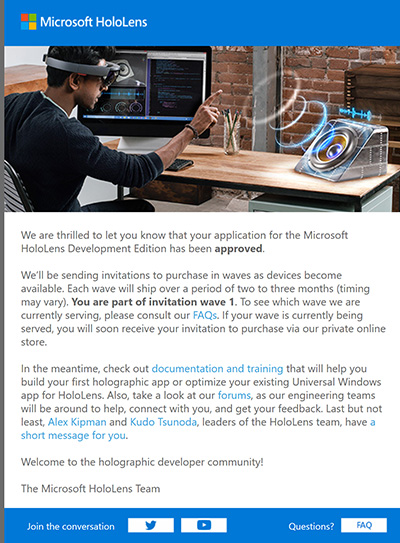 I don’t know what caused me to apply for the developer’s edition of Microsoft’s HoloLens in early January. I have a lot of interest in it and even wrote about it for Iretron before. I didn’t expect to be picked, especially because I’m not a full-time developer. But I applied for it anyway.

Yesterday, I got my invitation. After posting part of the invitation on Facebook, a lot of my friends have been texting me and congratulating me as if I just won the lottery. Well, it’s not exactly like winning the lottery, especially since the device will cost — are you ready for this — THREE THOUSAND DOLLARS!

The HoloLens is definitely a technological breakthrough.

The Hololens has been described as “amazing” by Gizmodo and other sites. One has to remember that the HoloLens is not a virtual reality device; it is an augmented reality device. What’s the difference? Well, virtual reality fully immerses you in its world. Augmented reality adds to your world. You can sit on your couch and see everything in the room, but a hologram of a television set will appear, where you can watch a movie. Of course, multimedia is just one of the aspects of the HoloLens.

Perhaps the coolest demo of the HoloLens so far is the game Project X-Ray, a shooting game where robots crack through your walls, hide under your couch, and try and kill you. You run around the room in order to kill them before they kill you. The game can really be an excuse to exercise. 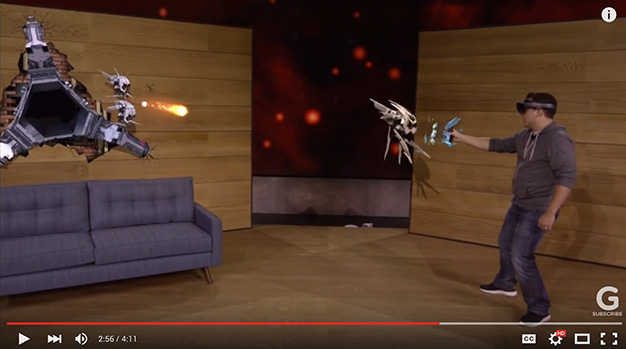 There are a lot of other ways the HoloLens can be used. I’m looking forward to a virtual television screen on my living room wall being created so I can watch television shows or movies. However, the HoloLens will also allow users, right out of the box, to create 3D objects and even send them to 3D printers. I can only imagine how the HoloLens will help education.

However, Microsoft’s augmented reality device isn’t a guaranteed hit. Remember when the Google Glass was supposed to be the next big thing? It ended up being — perhaps — the biggest gimmick in technology history. It was obvious from the start that the Glass was a gimmick, but nobody wanted to admit it.

Most impressions point to the HoloLens not being a gimmick. But Microsoft needs to follow up on their promise to create the most exciting technological product of the decade.