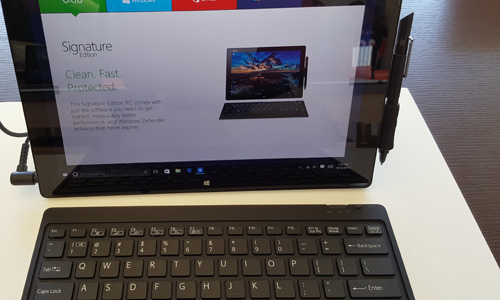 Well, I was totally in shock today. I went to the Microsoft Store at the Westfield Century City mall to take a look at the new Surface Pro 4 on display (more on that soon) and ran into a sort-of Surface Pro clone, the VAIO Z Canvas. Keep in mind that Sony no longer make’s Vaio Z laptops, but it has all the makings of previous VAIO computers.

The VAIO Z Canvas looks stunning at first: The 12.3-inch 2560 x 1704 pixel resolution display looks stunning. The keyboard, unlike the one that you can buy with the Surface Pro 3, looks usable. Then, when you hold it, some of the shine wears off. It’s about 2.7 lbs (without the keyboard), which isn’t too heavy, but heavier than it should be. 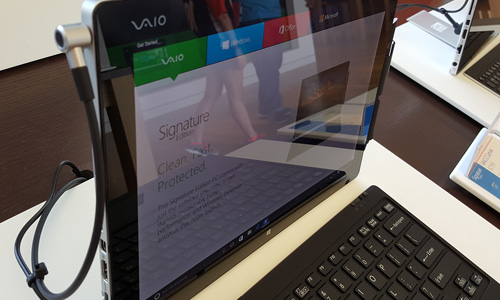 The VAIO Z Canvas looks perfect from a distance, but shows it's faults the closer you get.

VAIO is still in the year 2009, where the bezel around the screen is more than a half-inch. The keyboard connects to the Vaio through Bluetooth. There is no connection hinge, meaning you shouldn’t plan to use it on your lap. The Canvas has a very stubborn kickstand, which takes a little more strength than usual to position.

The VAIO Z Canvas comes built with a powerful Quad-Core Intel i7 processor. Unfortunately, it uses the outdated Haswell-generation CPU, which is just so 2013. The base unit costs $2199 and could run all the way up to $3099. VAIO says it is aimed more at artists than Surface Pro 4 users. It is easy to see why an artist would appreciate the VAIO Z Canvas, especially since the pen feels and operates like an actual pen, despite being on the thick side.

I used the VAIO Z with Photoshop and was disappointed that there was a slight delay when using the pen. Overall, I just wanted to go back to using Photoshop on my MacBook Pro. However, using Microsoft OneNote was a delightful experience and one that the Surface Pro can’t duplicate. However, who wants to hold a heavy 12.3-inch screen with a thick bezel to use as a notepad?

In summary, the more I used the VAIO Z Canvas, the more I saw it’s faults. Those interested in the VAIO Z Canvas would spend better time (and money) looking at the Surface Pro 4. Even though Sony is no longer associated with the VAIO Z, it does feel and operate like an overpriced Sony product.

Daryl Deino has been a technology enthusiast since 1995 and has written for several newspapers and technology sites. Please reach him at [email protected]
View all posts by Daryl →
This entry was posted in Review and tagged VAIO Z Canvas. Bookmark the permalink.