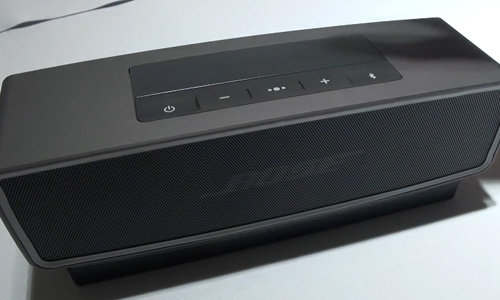 The new Bose SoundLink Mini II Bluetooth speaker has amazing sound for such a small device.

On Friday, I was able to test out the Bose SoundLink Mini II Bluetooth speaker, which is available for $199 at Best Buy. I own Bose’s SoundLink III Bluetooth Speaker and have been amazed that something so relatively small (but large compared to the SoundLink Mini) can produce such deep and rich sound.

While it’s true that Bluetooth headphones still haven’t hit the same quality as wired headphones, you really can’t tell a difference on a speaker since it isn’t so close to your ears. This wasn’t true of the original Bose SoundLink Bluetooth speaker that came out in 2011. Although it sounded good for its time, one could still pick up the “hiss” that high levels with Bluetooth headphones produce.

I listened to a variety of songs with the SoundLink Mini II: “All At Once,” by Whitney Houston; “Pump Up The Jam,” by Technotronic, “Iris,” by the Goo Goo Dolls and “Wake Me Up” by Avicii. The SoundLink Mini II played all the songs perfectly. Unlike the Beats Pill II, the SounLink Mini is made for more than Hip Hop and EDM. 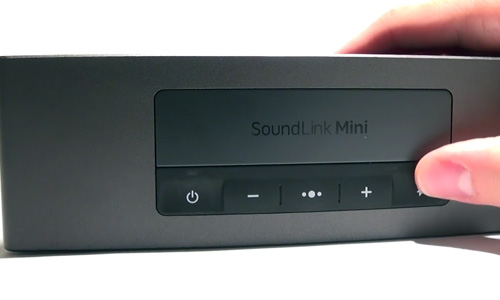 The updated SoundLink Mini Bluetooth speaker has better battery life than the original.

One minor problem I ran into with the SoundLink Mini II is that the deep bass decreased as the volume increased. For example, the deep lows of “Wake Me Up” were perfect when I had the volume halfway up. However, when I increased the volume, the bass started to decrease. However, the sound did not distort at all. Perhaps the speaker needs to decrease the bass at higher levels so the sound doesn’t distort. And it never does — not even on such a small speaker.

The best new feature of the SoundLink Mini II is that it can be used as a speakerphone. Unfortunately, I wasn’t able to test this aspect out, but it’s a welcome addition for Bose products. It’s quite annoying to have to grab your phone as your Bluetooth speaker goes silent. This is what I have to deal with when using the otherwise outstanding SoundLink III.

Would I recommend the new SoundLink Mini II over the SoundLink III? I think that, at $199 (compared to the $299 price of the SoundLink III), the Mini is a better buy. If you are only using the speaker to fill up a small room or personal space (such as an office at work), you should definitely purchase the Mini II, especially since it is much easier to carry around. However, if you are looking to fill up a living room, a  huge office, or even looking to entertain people at a picnic, the Bose SoundLink III Bluetooth speaker is still the way to go.

Daryl Deino has been a technology enthusiast since 1995 and has written for several newspapers and technology sites. Please reach him at [email protected]
View all posts by Daryl →
This entry was posted in Review and tagged Bluetooth Speakers, Bose, Soundlink Mini. Bookmark the permalink.