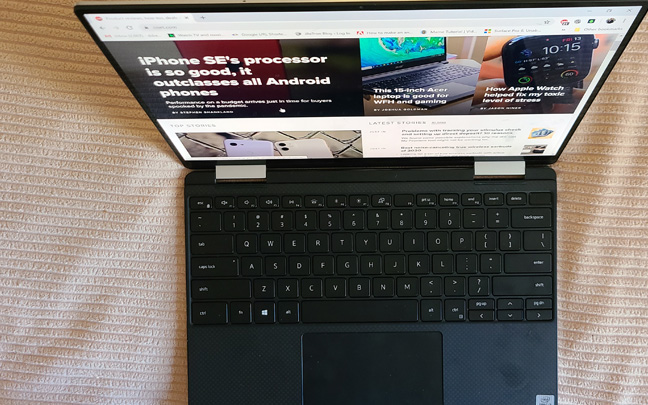 I recently reviewed the Surface Pro 7, and even though it isn’t a major upgrade from the Pro 6, I still crowned it king when it comes to laptop-tablet combos. Well, after using the late-2019 Dell XPS 13 2-in-1, I have to change my mind; Dell’s laptop outdoes Microsoft’s in many ways.

You would be shocked that a 13.4-inch screen fits into this device, which has a very high-quality platinum silver exterior and a hard rubberized black matte interior surrounding the MagLev keyboard. You have the option of getting a white interior, but that costs at least $50 extra.  The glass trackpad is very comfortable for your fingers.

The early-2019 Dell XPS 13 screen was good, but it seemed slightly washed when it came to color saturation. This certainly isn’t the case with the new XPS 13. The colors are very vibrant and the contrast ratio is so good that you could easily mistake it for an OLED screen. 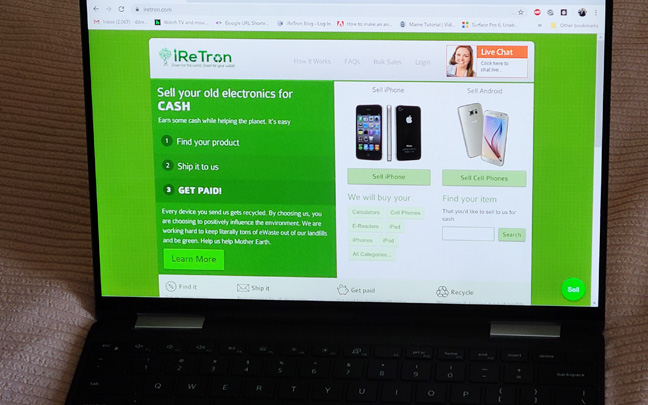 This time, Dell gives you a slightly larger 13.4-inch screen with a 16:10 aspect ratio that will satisfy those who believe the 16:9 aspect ratio is outdated for a laptop. To make things even better, there is barely any bezel surrounding the screen. Once again, Dell is somehow able to put a 720p webcam on top. The camera works well for software such as Zoom, but it’s certainly not one of the better ones.

This may be the most controversial part of the XPS 13 2-in-1, but the MagLev keyboard is really fantastic, once you get used to it. The keys don’t provide a lot of travel, but give your fingers a satisfying tactile crunch feeling when pressing them. You will likely be able to type as fast on this keyboard as you do on others.

The 10th generation Intel Core i7 processor and 16GB of RAM make the new Dell laptop run everyday tasks easily. However, once you get into photo and video editing, the processor heats up and makes a lot of noise as it goes into Turbo mode. The XPS 13 2-in-1 is adequate when it comes to editing graphics and videos, but this is far from the best to get when it comes to these tasks. 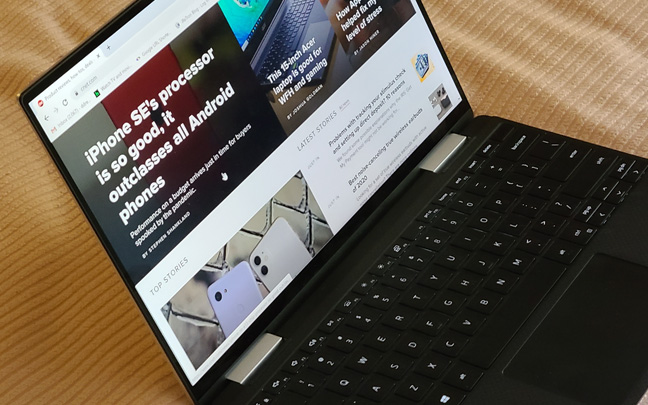 The XPS 13 2-In-1 can accomplish most tasks smoothly

The Intel Iris Plus graphics make it adequate for basic games such as Assassin’s Creed and some older titles. But if you decide you want to play more CPU-intensive games, you can always use one of the two Thunderbolt 3 ports to connect an eGPU.

There is one thing that is preventing this from being the perfect multimedia laptop – the speakers. They aren’t awful; there is more “oomph” and bass than there is on the early-2019 XPS 13. However, the speakers are on the bottom of the device and are easily blocked. It’s not a deal killer, but don’t expect the 2-in-1 to fill up your room with sound.

Folding 2-in-1 computers into Tablet mode has usually been quite cumbersome. This certainly isn’t the case with the new XPS 13 2-in-1, as the laptop folds easily and feels great as a tablet. The only thing limiting its tablet capabilities is the fact that it runs a desktop operating system (Windows 10). Dell offers an optional digital pen for $80, but it wasn’t available for this review.

If you buy a 4K laptop, you have to deal with the fact that the screen will eat a lot of battery life. For many, the tradeoff is worth it. The XPS 13 2-in-1 offers between four-and-a-half and five hours with brightness set at 75 percent. This is a little below average, but not dangerously so. Some have claimed to get as much as six hours of juice with the 2-in-1 when performing everyday tasks. This is certainly not the type of laptop that you can take to work without bringing the charger.

When Dell released their first XPS 13 2-in-1 in 2017, it was a promising but underpowered device. Dell has fixed almost all of the nuisances of 2017′s device and has produced the best 2-in-1 laptop ever. Let’s hope Dell can somehow move the speakers to the front of the device when the next version comes out.

Daryl Deino has been a technology enthusiast since 1995 and has written for several newspapers and technology sites. Please reach him at [email protected]
View all posts by Daryl →
This entry was posted in Review and tagged review. Bookmark the permalink.