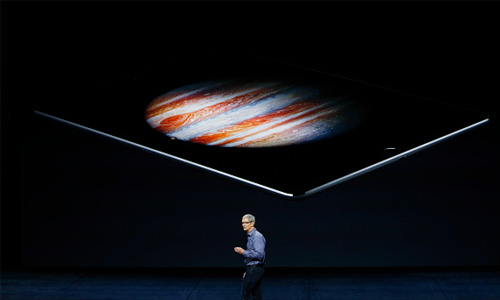 I will talk more about the launch of the iPhone 6s and 6s Plus in another post. The biggest surprise this week is the unveiling of the iPad Pro, which will be available in November. According to Engadget, Steve Cook described it as the biggest iPad announcement since the original iPad back on 2010. 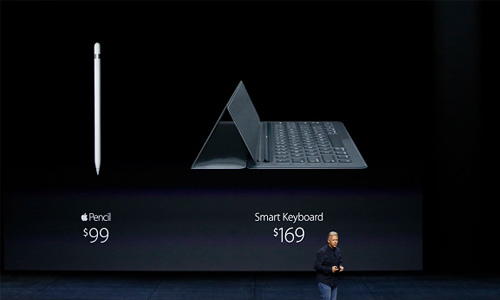 The iPad Pro has some expensive optional accessories.

According to the Verge, the “Apple Pencil” has sensitivity sensors so you can press lightly for brief strokes or harder for wider strokes. Apple says it feels like a true writing or drawing instrument. Even Microsoft (believe it or not) joined the presentation to show how well the stylus works with its apps. Adobe, who doesn’t hold a grudge anymore for Apple killing off Flash, demonstrated new software as well.

Then, there is the Smart Keyboard, which Apple claims isn’t like any keyboard you have ever used before. It does look nice, but Apple’s claim about its excellence will have to be tested. One will need to $169 for the keyboard and $99 for the pencil. Part of me is saying, “Buy the upcoming Surface Pro 4 instead!”

However, the other part of me is liking the iPad Pro for what it is. I think it should be priced $200 cheaper, especially because – unlike the Surface Pro — it won’t be running a full desktop operating system like OS X. But will the people who purchase the iPad Pro really care?

iOS has grown so much over the past couple years and is great for people who want to write documents, surf the Internet, edit photos, and even edit some videos. The iPad has also proven to be an excellent multimedia device for watching clips on Netflix, Hulu, or even YouTube. I wish the iPad had the same 3:2 aspect ratio of the Surface Pro 3, given that this aspect ratio perfectly balances between viewing the device as a tablet in portrait mode and viewing movies in landscape mode.

There will likely be a lot of complaining about the iPad Pro, how Apple has lost its touch, etc. However, by the time the iPad Pro is released in November, there will most likely be lines of people camped out at Apple Store retail locations the night before its release.

Daryl Deino has been a technology enthusiast since 1995 and has written for several newspapers and technology sites. Please reach him at [email protected]
View all posts by Daryl →
This entry was posted in Tech News and tagged Apple, iPad Pro. Bookmark the permalink.