Apple did not reveal good news today. Mac Rumors has the news.

Things could change with the release of the iPhone 7 and iPhone 7s, both which are scheduled to be released in September. Then again, most sources claim that the new iPhones won’t be much of an upgrade. Samsung has once again taken over the world with the Galaxy S7, Galaxy S7 Edge, and the (upcoming) Galaxy Note 7. 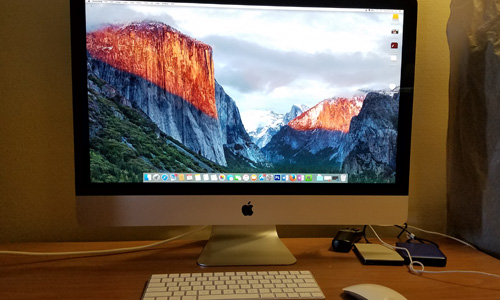 The iMac is another example of Apple's almost perfect hardware and quality control.

It’s easy to criticize Apple these days, but one thing can’t be denied: Apple makes quality products that barely break down, and when they do, their support is untouchable. I am typing this article on the 27-inch 5K iMac and I can’t even explain how beautiful this device is. There is absolutely no screen bleed (something that’s a given with computers from Microsoft or Dell). Everything else on the computer works perfectly as well.

I bought my first MacBook Pro in 2013. One year later, the screen started to show bleeding in the corners. I was really upset and took my chances of bringing it back to the Apple Store. I was expecting them to possibly fix the screen, but they didn’t. Instead, they gave me a new MacBook Pro and it was the 2014 version, not the 2013 version.

The problem with the latest iPhone is often with the software, not the hardware.

If Apple is having issues, it’s been with software. That’s really a separate issue than quality control, although some would argue. Many people, such as myself, ran into problems when upgrading to iOS 9 last year. My iPhone 6s Plus still won’t accept my Apple ID at times. Still, the phone works great overall, and even though it isn’t as technically advanced as the Samsung Galaxy S7 Edge, it works better. It’s smoother, even if more bulky.

Daryl Deino has been a technology enthusiast since 1995 and has written for several newspapers and technology sites. Please reach him at [email protected]
View all posts by Daryl →
This entry was posted in Tech News and tagged Apple, iMac, iPad, iPhone. Bookmark the permalink.