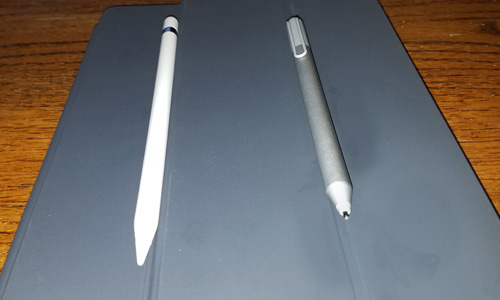 The iPad  has always been a great tablet, even if tablets are becoming less relevant. The one thing the iPad has always lacked has been a digital stylus. Thanks to the iPad Pro (both the 12.9-inch and new 9.7-inch one), that has changed. Apple might have taken a long time to create a stylus, but the Apple Pencil is the closest thing to a pen (even though it is an awfully big one) that a tech company has ever created.

The original Surface Pro had a Wacom stylus, which produced smooth letters, but the accuracy of where the pen touched the screen was often off. Microsoft changed the stylus to an N-Trig one with the release of the Surface Pro 3. Although the new stylus offers better accuracy when touching the screen, the writing is less smooth. The N-Trig stylus offers a “squiggly” type of writing that feels more unnatural when you write slower. Drawing a slow straight line is almost impossible.

This isn’t to say that Microsoft’s N-Trig stylus is bad; it isn’t. However, when you use the Apple Pencil with the iPad Pro, you realize how much Microsoft’s stylus is lacking. Even the S-Pen of the Galaxy Note 5 and bigger Note tablets provides a better writing experience than the N-Trig Surface Pro 4 pen, although the S-Pen looks and feels really cheap. 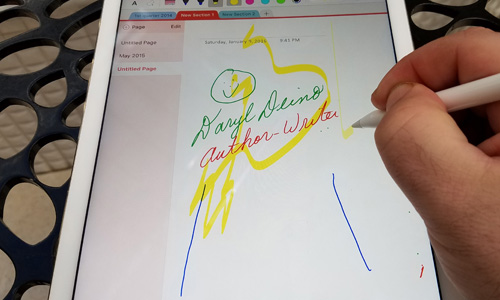 The Apple Pencil provides a smooth writing experience on the iPad Pro.

Even using the Apple Pencil with photos produces better results than Microsoft’s N-Trig pen. It’s unfortunate, however, that the iPad Pro doesn’t offer a version of Photoshop that is even close to being as useful as the one on Windows 10 desktops and tablets, like the Surface Pro 4.

It is highly rumored that Microsoft will introduce a new Surface Pen for release with the Surface Pro 5. Since Apple has really changed the game with the Apple Pencil, you can bet Microsoft will probably invent its own stylus technology. Pretty soon, nobody will be writing with a regular pen and pad of paper anymore. They’ll all have tablets, which will be easier to carry around than a notebook pad or even a folder with a couple pieces of paper.

Daryl Deino has been a technology enthusiast since 1995 and has written for several newspapers and technology sites. Please reach him at [email protected]
View all posts by Daryl →
This entry was posted in Review and tagged Apple Pencil, N-Trig, Surface Pro 4. Bookmark the permalink.