An Airplane Ride With The HoloLens

I took a flight to Chicago recently and brought along my HoloLens to help make time go by faster. I was seated between two people who didn’t really believe in wearing deodorant, so I had to do something. Here is a video of me watching Jurassic World on a holographic screen. 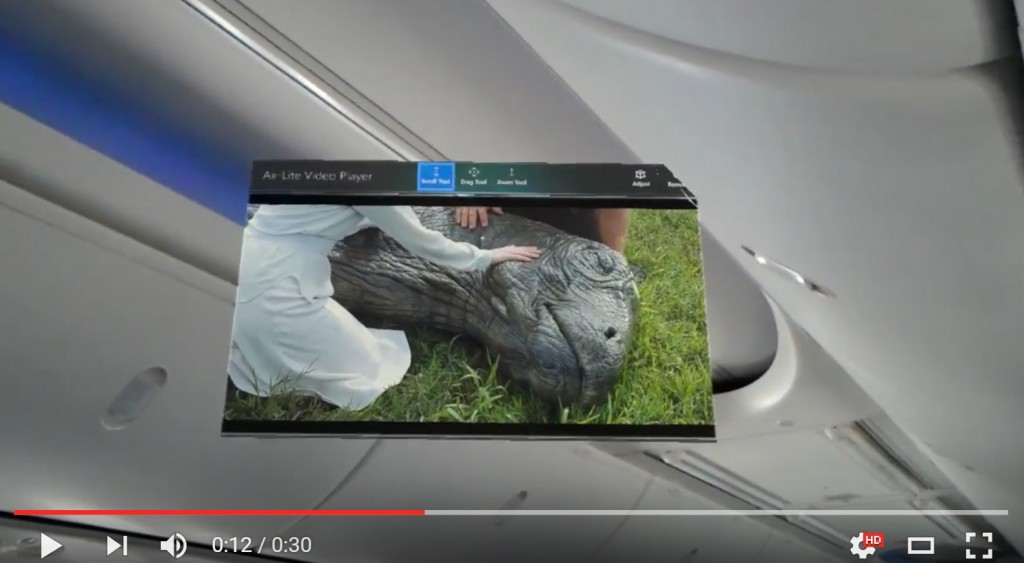 Yes, I did get a lot of looks. Even the flight attendants thought I was crazy. Some, of course, were just curious. But I didn’t care. I wasn’t forced to watch a movie on one of those low-resolution screens on the back of the seat in front of me. I was able to watch a full high-resolution screen, even if the screen was just a hologram.

There were a couple of things I noticed when watching a movie for an hour and a half. The weight of the HoloLens, although not too heavy, really does start to take its toll on your face after a half hour. I suppose one can get used to it. It’s important to note that Microsoft doesn’t recommend that you keep the HoloLens on for more than a half hour at a time.

The second thing I noticed is that the battery life, considering the HoloLens is really a Windows 10 computer, wasn’t that bad. After watching the movie for 90 minutes, the battery life only dropped to 50 percent. I would have expected it to drop more.

The most annoying part of loading movies on the HoloLens is that you can’t load them directly (yet). I had to upload through OneDrive and then download through OneDrive on the HoloLens. Of course, I did this before I boarded the plane and both processes really don’t take long if you have a high-speed Wi-Fi connection. I still haven’t figured out how to delete a movie yet.

In Chicago, I showed my HoloLens to some kids. I thought they would be blown away by the experience, but they surprisingly weren’t. Maybe it had to do with the limited field-of-view or the lack of software (for now), but they preferred the Gear VR’s virtual reality experience to the augmented one that the HoloLens provides.

As I said before, the HoloLens has a lot of potential. It’s too early to say that it will be a huge success. If Microsoft can increase the field-of-view and add more compelling software experiences, which I’m sure they will do in the near future, the HoloLens can become a great educational product that doubles as a fantastic media player as well.