I get a lot of  small technology items in my mailbox, and admittedly, many of those things end up not being opened. But I do donate a lot of these unwanted items to schools and nursing homes. However, when I was sent RAVPower’s HyperAir wireless charging stand, I was intrigued. This is mostly because I’ve had the RAVPower Turbo+ series 20100mAh charger for almost two months, and I can’t live without it.

The Turbo+ charger is a lifesaver that has helped keep my devices charged when I’ve barely been at home. It’s the best $40 I’ve spent in the past five years, although Amazon now lists it for $49.99. So, I was excited to try the HyperAir Wireless, even though I’m not quite into wireless chargers. I’ve always thought they looked cool, but why not just use a wired charger since it charges a lot faster? 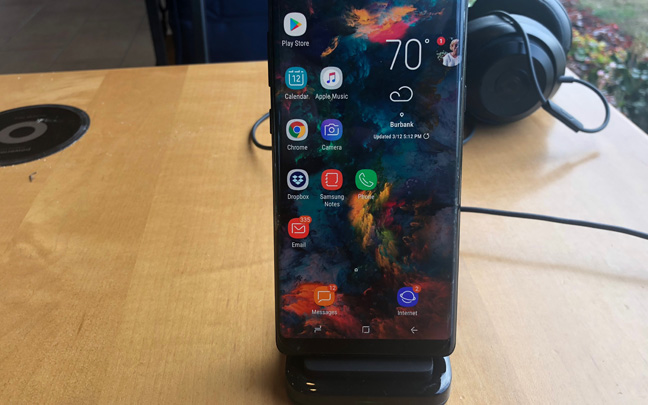 Charging the Galaxy Note 8 with the RAVPower HyperAir

The HyperAir, however, is different. It provides 7.5W charging for the iPhone X (two hours and 20 minutes for full charge), and 10W charging for Android devices (it takes four hours to completely charge the Galaxy S8). It took a little longer than four hours to charge my Galaxy Note 8. The convenience, of course, is that you don’t have to plug the phone in — you just put it on a stand overnight. And it’s a comfortable stand.

My first wireless charging stand was from Samsung, and it came with my Galaxy S7 purchase. However, it was sort of bulky, and despite the fact that “fast charging” was on the label, it didn’t charge so fast. So, I decided to just go with plugs. But the HyperAir charger is not only portable; it’s very comfortable. And you can run your fingers all over the screen of your device while it’s on the stand without worrying about the phone flipping over.

I have a plastic sleeve on my iPhone X, and the HyperAir charges it almost as fast with it on as it does without it. I could easily take the sleeve off every time I need to charge the phone, but it’s not worth the slightly faster charge. In 30 minutes, I went from a 50 percent charge to 60 percent. 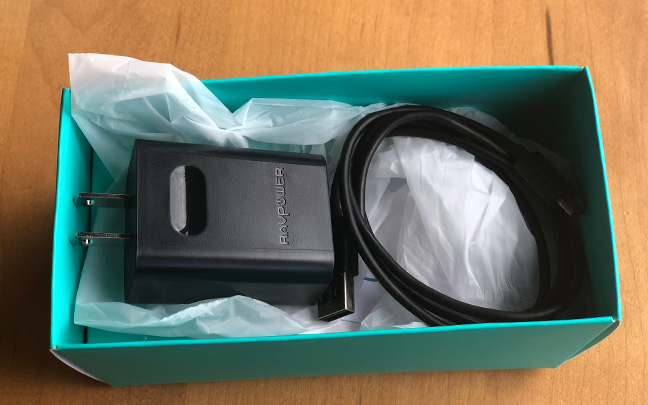 The RAVPower HyperAir comes with a small (but thick) plug and cord.

Another big difference between this charger and others I’ve tried is that, thankfully, it doesn’t get too hot, even after several hours of use. After  the whole Galaxy Note 7 debacle, I’ve been afraid of things getting so hot that there will be an explosion.

So, is this something I would personally buy? Perhaps not — only because I’m still not blown away by wireless chargers. But others, including many of my colleagues, feel differently. If you are going to purchase a wireless charger, the HyperAir is not only a worthwhile purchase, but it’s made by RAVPower — the company that makes the best charging devices in the business.

Daryl Deino has been a technology enthusiast since 1995 and has written for several newspapers and technology sites. Please reach him at [email protected]
View all posts by Daryl →
This entry was posted in Review and tagged Galaxy Note 8, HyperAir, iPhone X, RAVPower, Wireless Charging. Bookmark the permalink.